The Amazing Results of Patience and Skill

I probably would have had this project well underway had it not been for first day of great heat wave of the United States Mid West. There were other problems – a broken spoke and deciding how to mount my loop antenna. I left the zip ties hanging out in case I want to move it.

20-Meter On the Trike

I’ve had problems with feeding the loop while maintaining vertical clearance for the porch roof. Fabricating a solution was going to involve hours, so I threw out a drag wire and ham stick. Lots of people on CW. K5LN signed and I tried to go back to him. He must have moved off frequency. Didn’t make any contacts and it was too hot – 90+ – in the sun, so I only stayed out an hour. Wish me luck. 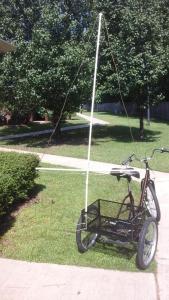 It’s about ready for Bicycle Mobile Radio with a loop antenna.

How QNCW Came To Be

Twenty years have passed since the fatal demise of CW was mention (at least in my little world).  Some said not to worry about CW, that the sooner is was gone the better.  I wrote a letter to the editor of the local newspaper.  One of the underlings sat on the letter for a few weeks and then sent it back.  That was when I decided Lane County Oregon a CW Journal.

Leo, KB7LOC (SK) and I decided to put a few things together in time for the Rickreal, Oregon February Ham Fest and called it QNC, the CW Journal.   It was a lousy failure.

Internet, as we know it today, did not yet exist.  I’d discovered a way to log into the telephone BBSs used by the staff at colleges and universities throughout Oregon.  It would have served me well, but using it for my own personal gain would have caused a firestorm.

Somehow editors and publishers heard of this tiny venture.  Letters arrived from the UK, Germany, Norway, Canada, and Australia assuring me that CW was alive and well.   A ham from the Republic of South Africa sent me a story and photos of his experience in the early 1960s, and asked me to publish it in six parts.  In his letter he explained the reasoning behind his request.

The international governing body that oversees who owns the existing land masses around the world informed the Republic of South Africa that they needed to populate Marion Island for one year if they wanted to keep it as their own.  The ham in question was 19 when he was selected as the radio operator.   During this year he’d hoped to conduct a QSO with his father during that year, but every time he sent out his Marion Island call sign there was a fierce pileup and he was never able to contact his father.

The purpose of this story was to call out those amateur radio operators with whom he’d chatted during that year, but had failed to acknowledge with a QSL card.

Publishing QNC was a hoot, but I was also a member of Oregon Army MARS and held the office of Publicity Coordinator.  That required time.  Then there was the Gulf War.  Those of us in Oregon passed nearly 10,000 messages between troops and their families.  Oh, and I had a job and a wife, too.

It was the forty or fifty dollars I had to pitch in each quarter to cover the postage and printing that took its toll.  After a decade I brought it to a close.

Now, after a decade, I’ve decided to introduce QNC, the CW Journal with its own website living at http://www.qsl.net/n7net/.  As before, I’ll be relying on you, the reader, to help me keep this thing afloat.  Email your radio related stories and photos to: n7net@yahoo.com.

I tuned my radio to 14.060 MHZ then held my breath while listening in the headphones. Instead of copying Leo, KB7LOC, I heard what sounded like the War of the Worlds sound stage. But what should I expect on this frequency in the middle of the night? My being here was no chance event, but rather the result of carefully laid plans that might never produce a single positive result.

In April 1999 Barb, KC7BSY and myself, N7NET, traveled from Oregon to Arizona’s Sonoran Desert and rented a comfortable spot to pause.

Many folks arriving at such desert locations search for stout walking sticks, large water bottles, and perhaps wide brimmed hats. For us radio people, however, digging-in means configuring VHF and HF radio stations. While Barb doesn’t share my CW enthusiasm, she enjoys two-meter radio and has more than once conducted the local two-meter traffic net when the NCS fails to show.

Our adventure began in earnest after purchasing a used fifth-wheel trailer. It came furnished with pots and pans, dishes, and silverware. Located more than a mile from the nearest power grid meaning we had top generate our own power.

With limited funds, our final choice consisted of a single 75-watt solar panel and two 6-volt, deep-cycle flooded batteries wired to provide a 12-volt power source. Only then was it time to consider a radio.

My old Swan 400, still in Oregon, had served me well during the ’91 Gulf War but it was a power hog. The new radio would have to be solid-state. After a day searching the Internet at the Ajo City Library, I chose an MFJ-9420 transceiver with a CW board. And a G5RV wire antenna from AES in Las Vegas completed the system.

MFJ reviews claimed there is no hotter receiver available. The speech processor on SSB is no slouch either. During the hours of midday sun the output to the coax measured just shy of nine-watts. It was enough signal to fetch sideband QSLs across North America, including Hawaii and Alaska. After sunset the power output reduced to a needles-width greater than five, close enough to qualify for QRP. Then, as though Leo held his ear to ground, Barb copied his message off the National Traffic System.

Leo and I both attended tech school at Keesler AFB, Mississippi during 1956 – 1957. We didn’t meet again until 1991 during the Gulf War while we both served in Oregon Army MARS. The reunion was mind boggling.

QRP? Not a problem, I thought. His QTH, Seal Rock, Oregon, some seventeen hundred miles to the north northwest will be a walk in the park for this little hummer.

“So, how are we going to do this QRP?” I asked him over the payphone.

“I want to try out my newly acquired, gently used HW-8. I teach guitar and Wednesday evening is my only free time. How’s your schedule?” he asked.

He pauses upon learning the only rig I owned is a 20-meter mono-bander. “Well, it doesn’t sound hopeful, but let’s give it a shot. I’ll call you every Wednesday starting at seven, my time. I’ll continue sending for one minute. If you don’t respond I’ll continue every quarter hour on 14.060 plus or minus QRM. If we haven’t connected by eight I’ll secure my station until the following Wednesday.”

It was QRP the hard way, his one-watt and my five passing in the night. After several Wednesdays the escapade takes on a flavor of hopelessness, but we labored on.

One night I heard his suffix, a squeaking LOC. His frequency is too high, sounding more like an Irish penny whistle. Catching my breath, I listen with all the strength I can muster. Then KB7LOC finds its way through the dark. I issue him a signal report of 224. He sends me a 335. Then he’s gone, vanishing into the night like a wisp of cigar smoke.

Highlights of our second contact have escaped me. His QSL card is my only proof it ever occurred.

Our third time the band is filled wall-to-wall with atmospheric noises. I’m reminded of a scene in the movie Apocalypses Now. Leo reports my signal as a perfect 599. His is signal, however, is heterodyning with another station that’s dead on. The echoes and ringing are reminiscent of a carrier fresh in from the Polar Region. I send him a 221, and I think that is generous.

Three contacts are our grand total for the winter of 2000. We should have tried harder for more QSOs. But neither of us foresaw the future.

In September 2007 Leo became a Silent Key, taking with him all our chances of another marathon.

His will left the HW-8 to me. It needs work. The band switches probably need cleaning. When I’m finished using it I’ll be casting about for someone with good ears who is interested in doing QRP the hard way.

The Results of Skill and Patience